When Fishermen in Rukam Village of Jambi Province Lose Their Fish Thousands of hectares of dense peat swamp forests on the banks of the Batanghari River hold unique biodiversity of aquatic ecosystems. However, peatlands conversion and drainage have threatened the habitat of millions of fish and the livelihoods of fishermen in Rukam Village, Muaro Jambi District, Jambi Province.

Rukam Village has an area of ​​12,900 hectares that stretches on the Batanghari River banks, including 2,800 hectares of peatlands with a depth of 2-5 meters and 2,327 hectares of pristine swamp forests.

However, the village's existence is threatened because it is squeezed between two giant plantations, i.e. PT. Erasakti Wira Forestama (EWF) and PT. Wira Karya Sakti (WKS).

In 2002, PT. EWF started its operation after obtaining a permit from the Head of Muaro Jambi District, Burhanudin Mahir, to cultivate more than 4,000 hectares of land in Rukam, Teluk Jambu, Mudo, and Sekumbung Villages. More than half of it is the customary forest of Rukam Village, which is mostly peat swamp.

Shortly after obtaining the permit, the peat swamp was drained and turned into oil palm plantations. The peat dome was drained, water was channeled through canals and controlled by a giant pump to regulate water circulation. The company also built a 9-11 km long embankment with a height of 8 meters to block the floods.

Which made the lakes and ponds dry. Datuk Syafei, a Rukam community leader, said that there were at least 10 lakes and ponds that were drained for oil palm plantations, i.e. Leban Condong, Belanti, Sarang Burung, Mentangur, Hijau, Bulat, Rumbai, Panjang, Senen, and Betung. The freshwater fish ecosystem that has supported the Rukam fishermen's lives for hundreds of years has disappeared. There are no more boats bustling around in the peat swamp forests. The fishing nets and lift nets were left unkempt. Slowly, Rukam Village turned into a fishing village without fish.

The Indonesian Forum for the Environment (WALHI) Jambi conducted a study together with researchers from Jambi University in 2019 and found that the economy of Rukam Village had deteriorated since PT. EWF came and converted the peat swamp. Many fishermen lost their livelihoods due to the damaged habitat. The fishery sector was the biggest economic contributor for Rukam residents, the value was estimated at IDR 26 billion a year.

In the past, fishermen in Rukam had a big harvest during the rainy season between November and February. Many types of fish, i.e. gabus, tembakang, lembat, bujuk, serandang, were carried away by the water and trapped in their nets. Their catch increased many times over. Syafei described that stagnant water was a blessing in the past.

The harvest season continued until the puddles slowly receded. A lot of fish, i.e. merah, lambak, jale, beterung, were trapped in the lakes and ponds. In the afternoon, the fishermen looked for Botia fish (Chromobotia macracanthus), an ornamental fish endemic to Sumatra with export value.

But after the ecosystem in Rukam has changed, there is no more harvest season. “All the expensive types of fish are gone. Only gabus, betok, sapil, sepat siam are left. We can't find Botia anymore," said Syafei.
Botia fish can be found in Batanghari River and Barito River. This fish with black and orange stripes is not only traded in Indonesia, but also exported to China, Singapore, Malaysia, and even Norway.

Tedjo Sukmono, a biologist from Jambi University, said that anthropogenic activities, such as the conversion of forests to oil palm plantations and environmental damage, are threatening the population of freshwater fish in Jambi.

He said that ponds along the Batanghari River have an important function to save the fish during the dry season. Gray fish such as baung, and black fish such as gabus, toman, sepatung, tembakang, gourami, and sepat, are most affected when the water habitat is disturbed.

"They can't build nests if the environment is disturbed, the oxygen level decreases, and their living space becomes smaller," he explained.

When the environmental impact assessment document (AMDAL) is prepared for land clearing, fish get less attention and tend to be ignored. Tedjo pointed two contributing factors, i.e. the technical team that prepared the AMDAL does not understand about fish and fish are considered to have no major impact.

Tedjo suggested to strengthen the fish database in areas that will be converted, not only in terms of fish utilization but also its ecomorphological and ecobiological aspects.

“For example, if a protected species such as radiangus or rare fish such as belida is found in the area that is about to be cleared, then the area should not be disturbed or should be made into a conservation area. Special consideration should be made since we find important species there.”

The Rukam community suffers due to the degraded peat

In 2013, after more than ten years of controlling the land in Rukam Village, PT. EWF built an embankment 8 meters high and 11 km long to prevent floods that occur every year.

Since then, the flood inundation in Rukam has been getting higher every year and submerged people's houses and fields. Bakri admitted that he failed to harvest chilies again and again because his land was flooded during the rainy season. Planting time is getting shorter because floods often come suddenly.

During the dry season, the village experiences drought. Canals as deep as 8 meters built by the company are suspected to be the cause.

As compensation, the company built two drilled wells to provide water for the residents. PT. EWF also promised to expand paddy fields but so far this has not been realized.

Besides causing an ecological disaster, the diminishing peat swamp forest has made fishermen lose their income and forced them to work for the company as casual laborers to survive. Some of them moved to other villages because their economy has fallen apart.

It has been three months since Bakri left Rukam and moved to Ramin Village, which is about 4 hours from Rukam in search of a new life. He said that it was no longer feasible to live in Rukam.

"In the past, we used to live prosperously in the village. But since the company came here, there were endless conflicts. I'm tired of it so it's better to move," he said.

Since 2015, WALHI Jambi has been involved in advocating Rukam residents. Dwi Nanto, Manager of Research and Information at WALHI Jambi, said that conflicts with companies are difficult to avoid when village lands are converted into concession lands.

The land conversion has forced Rukam residents to adapt in order to survive. However, environmental damage makes their life even more challenging. Dwi said that the disappearing peat swamp has greatly impacted the Rukam residents who are mostly fishermen.

“Now many of them work as laborers for the company. The economy is tough, that's why many people choose to move away. Over time, Rukam will be empty, left by its residents.”

Pantau Gambut also contacted PT. EWF to ask for their response. But until this article is published, the request for an interview has not been responded to. 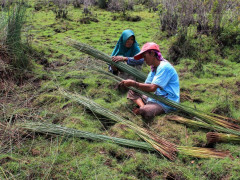 Criteria of Public Officials Who Care about Peatlands