The photo, which was taken in October 2020, shows more than eight damaged canal blockings in Tanjung Peranap Village, West Tebing Tinggi Sub-District, Meranti Islands District, Riau Province. The canal blockings are in various states of disrepair. Some are 60 percent damaged. But some canals have 100 percent damage (totally damaged). Romes Irawan Putra, Executive Director of Kaliptra Andalas, said that many rewetting infrastructures in the form of canal blockings have been built as part of an effort to restore the peatlands. However, many canal blockings are no longer functioning properly, especially those built in 2017 and 2018. This is certainly a very disheartening sight. Especially considering that the construction of the canal blockings required a significant budget, but were unable to fully hydrate/rewet the peatlands. As result, the peatland re-wetting efforts in order to prevent forest and land fires by building canal blockings have not been successful.

“Monitoring and evaluation must be carried out for these peat rewetting infrastructure projects, to ensure that they are beneficial to the community and the environment. If not, peat drainage will continue and peat fires may occur again in the same location,” he said.

Based on the 2019 fire data, forest and land fires continue to reoccur two years after the canal blockings were built in West Tebing Tinggi. Based on the analysis result conducted by Kaliptra using the government's SiPongi data, which uses Terra/Aqua satellite imagery, there were 56 hotspots between February and March 2019. These hotspots were located in a stretch of peatland in Tanjung Peranap Village bordering Tenan Village and Kundur Village, West Tebing Tinggi Sub-District. The total burned area reached 859.15 hectares.

The same situation occurred in Lukun Village, East Tebing Tinggi Sub-District in 2019. Massive fires raged in this village for weeks. In Lukun Village, a canal blocking was built near settlement areas in 2017. At least 16 blocks were built on the right and left sides of the main road. But the fire-prone areas are located far from where the canal blocking was built. Responding to the unsuitable placement of the rewetting facility, BRG said that the canal blocking project site was fully based on the community’s proposal. The misplaced canal blocking led to land fires in Lukun Village. The fire also burned the area managed by PT National Sago Prima, which was planted with commodities that are the source of livelihood for the community. The burnt area was approximately 1,224 hectares according to data from independent research conducted by the University of Riau and jointly published with BRG in 2018.

In the following year, Pantau Gambut conducted fire residual analysis on 8 February-30 April 2019, which shows that 1,450.73 hectares of land were burnt in Lukun Village. In addition, WALHI also noticed the lack of synchronicity between the rewetting program and the restoration approach in the Peat Hydrological Area (KHG) or the intact peatlands. In his opinion, if the downstream restoration efforts are properly carried out by the village but the upstream effort, which is controlled by the company, are not conducted properly, then the restoration effort will not be effective. This is what happened in Siak District.

"This is related to authority and communication issues. When it comes to restoration efforts in the concession areas, the BRG plays a supervisory role. Because they don’t have the capacity for implementation. Therefore, it is important to ensure that the parties with the authority support each other in this restoration program. For example, the Ministry of Agriculture should also supervise the restoration program carried out by companies in their concession areas,” added Fandi.

By adding the word “Mangrove”, the BRG is now known as BRGM. Based on the facts from the field, great hope has been pinned on the new leadership and structure that was inaugurated at the end of December 2020.

“The new BRG leadership must be able to improve the situation and learn to be more effective, by conducting stricter supervision during the planning, construction process, and active community involvement. If that is done, it will minimize the ineffectiveness of the restoration project. This is only one of the many problems occurring in the restoration program in Riau, which include issues such as revegetation and community economic and social revitalization,” said Romes. 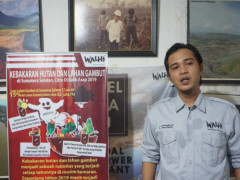 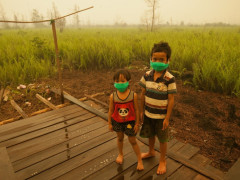