Small farmers in Riding Village are trying to quit the sonor farming method. When they first clear the land to be used as rice fields, they spend tens of millions with unsatisfactory results, but they don't give up. The rainy season will continue their dream of farming using the tugal method without burning the land.

The word "Ampera" was not clearly visible that morning. However, the traffic was still busy on the bridge that divides the Musi river in Palembang City. I tried to get closer to less than 75 meters from the word printed on the middle of the bridge. However, the text located under an analog clock was still blurry even though it was already around 6 am. Visibility in Palembang City has been limited in recent months.

After taking some photos, I continued my journey to Riding Village, which is located in Pangkalan Lampam Subdistrict, Ogan Komering Ilir (OKI) District, South Sumatra Province. The distance is around 70 km or 3 hours by car. Along the way, I had to reduce the speed several times due to the smog covering the road. Based on data from the South Sumatra Regional Disaster Management Agency (BPBD), the smoke in Palembang City probably came from Riding. Daily report from the Media Center Command Post at the South Sumatra BPBD showed that as of Wednesday, 9 October 2019, 57 hotspots were found in OKI District. This number was the highest when compared to 50 hotspots in Musi Banyuasin and less than 10 hotspots in other areas.

In Riding Village, I met Iswadi (46 years old), a resident who is committed to farming without burning the land. He said most of the farmers in his village still use sonor and tugal methods. It was only him and his two friends who are eager to quit the sonor method. Sonor is the practice of sowing seeds by burning the land first. Sonor method can scorch the surrounding land, which in turn can cause a bigger disaster.

One of the village elders brought me to a rice field owned by Iswadi and his two friends located about 6 km from Riding Village center. We passed through a dusty road which is a connecting road to PT. OKI Pulp and Paper Mills in Sungai Baung Village. Along the way, I saw the expanse of smallholder rubber plantations, shrubs, swamps, and peatlands.

After arriving at Iswadi's plot, I became acquainted with Ujang Alirman, who also manages rice fields without burning the land. Ujang then took me to the rice fields managed by Rudi, who is also Iswandi's friend. In Rudi's first plot, the rice started to turn yellow but I saw different things when visiting the second plot belonging to Ujang, where the height of the rice stalks was abnormal and there were weeds and ferns between the rice plants. There were also dikes and dry tertiary canals overgrown with weeds as high as 170 cm. About 100 steps from there, we arrived at Iswadi's third plot which was just as dry. "The rice in the first plot grew much better than the ones in the other two plots because the second and third plots were very dry," said Ujang.

Iswadi, who just arrived, immediately told me about their recklessness in choosing the no-burn method to plant rice. He said that before planting rice seedlings, they made dikes or embankments to keep water all year round on peatlands. Then they also cut the grass and cleaned the weeds that grew on the surface for the rice to grow properly. Their work went well without a hitch, so Iswadi and his friends were optimistic that they could produce a lot of rice.

The work didn't stop there. Iswadi, who is also the Head of Sub-village II in Riding Village, invited several workers to turn the soil using hoes, crowbars, and spades instead of plowing machines or buffalo. After doing the process for almost a month, it was time to plant the rice seeds.

“Planting rice without burning the land is very costly indeed, it is very expensive compared to burning where we only need matches. The process is fast and the soil becomes fertile. We conclude that the no-burn method would be difficult to implement without government assistance. No farmers can afford it if they must use their own money," said Iswadi.

Iswadi has abandoned the sonor or burning method since 2015 due to a prolonged dry season and a massive fire that occurred in Riding Village. Since then, Iswadi is committed to abandoning planting methods that can damage the surrounding environment. Looking at the 2015-2018 hotspot data, there was a significant decrease in hotspots in Riding Village between 2016-2018 and there were no hotspots at all in 2016 and 2017. Unfortunately, some hotspots were detected again in 2019 even though the number was not as high as in 2015.

Distribution of hotspots in Riding Village in 2015-2019 ©Pantau Gambut

Iswadi explained that he and some of his friends were interested in abandoning the sonor method after the World Resources Institute (WRI) Indonesia invited them to collaborate to try abandoning the sonor method and applying new farming methods without burning. WRI also assisted in preparing three demonstration plots on Iswadi's land. But unfortunately, it didn't rain at all after the rice was planted in mid-July. As a result, the rice growth was not normal, the height of the rice stalk was less than 15 cm, the rice grains were small, and even most of them died. “We predict that we can harvest in October if we get normal rains. However, it only rained about 3 times during the early planting period. But we are still grateful that some of the rice is growing,” complained Iswadi.

Abandoning the sonor method is indeed quite difficult for small farmers like Iswadi, Ujang, and Rudi. In the past, they only needed matchsticks costing 3 thousand rupiahs to clear the land, but now they need to spend almost 33 million rupiahs just to prepare each plot of land for planting rice. The size of each plot is 50 m x 100 m. Iswadi detailed that during the preparation for planting last July, he brought in 10 workers to build the dikes. During the six-day process, he spent around 9 million rupiahs. Next, the cost to clear the land was 7.5 million rupiahs for hiring 10 people for 5 days. The next expense was to plow the land by hiring 10 people for 6 days costing 9 million rupiahs. While the cost of planting was 7.3 million rupiahs for hiring 7 people for 6 days. The costs will continue to increase. From his notes, farmers have to prepare money for fertilizers, spraying the crops with branded pesticides 10 times and cleaning the weeds.

“Each worker gets a daily wage of 150,000 rupiahs, so if you calculate it, you will not get a return on your investment. That's why the government must seriously help us if they really want people to abandon the burning method," added Iswadi.

Although the first crop failed, the three small farmers remain committed to continuing the tradition of clearing land without burning. The plan is that after the rainy season comes, they will plant rice using tugal method or sowing the seeds directly into the holes made on the soil.

To overcome the drought in rice fields and burnt land, Iswadi hopes that the government can build reservoirs, normalize canals, and drill wells in areas that were burned in 2015. In his opinion, only the government or large companies have the capability to take those three measures. Those solutions will not be realized if they only rely on the community’s own effort.

Ir. Ruli Joko Purwanto, M.P, Lecturer at the Faculty of Agriculture, University of IBA, Palembang, explained that the sonor farming method is a tradition inherited from our ancestors.

In today's era, farming by burning the land should be abandoned with the application of modern farming methods and tools. By using the non-burning method, we can free ourselves from smog and fire disasters and follow the global trend.

He guarantees that the harvest will remain abundant as long as the land is managed properly. "Many areas have succeeded by implementing the no-burn farming method, and Riding is heading that way," said Ruli Joko Purwanto.

According to Ruli, to avoid the sonor method, farmers can manage their land by putting all the remnants of cut and slashed plants into one pit or rorak. Then the weeds, straw, and tree branches will naturally rot and decompose. If the farmers want faster results, they can add EM (effective microorganism) solution to the remnants of the plants. EM formula consists of various microbes that decompose organic matter. “You can find this formula with different brands in the market. There are also many types with similar use and application method," said Ruli.

Responding to the assumption that farming by burning will increase the fertility of the land, Ruli said that this is not entirely true.

Based on several studies and research, the ash from burning contains only a few nutrients that can fertilize the soil. Moreover, scientifically, many nutrients will be lost due to the burning process, especially volatile nutrients such as nitrogen.

"So, some old methods can actually harm farmers because many nutrients will be lost during the burning process, especially the volatile ones." 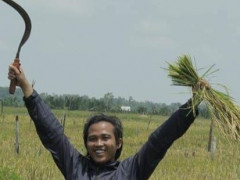