Pineapple plantations function as firebreaks. The fire spreading from the bushland is extinguished to prevent it from scorching the village roads and other agricultural areas.

Syafii swung the machete in his right hand. He is cleaning up his source of livelihood, a pineapple plantation located on peatland.

Syafii initially planted 500 seeds, but 10% of the seeds failed to grow. However, most of the seeds grew to maturity. In the last two years, he has had four harvest periods. Each harvest produces 200 pineapples, which he sold for a total price of Rp 600,000 – Rp 800,000.

Profit is only one of the primary benefits that Syafii gains from cultivating pineapples. Another benefit, which is just as important, is protection from land fires that could break out twice a year.

Syafii managed peatland surrounded by shrubs located on the side of the main road in the hamlet. During a long dry season, the area often caught fire.

"I don't know how the fire started. It suddenly started and spread," said Syafii.

As a result, pineapples have been planted on the side of the road in hamlets since 2018 to prevent fires. The residents call it a firebreak. Other than Syafii, three other residents also cultivate pineapples on the same peatland. The total area of the four plots is approximately 200 x 10 meters.

Pineapple plantations function as firebreaks. The fire that spreads from the bushland is extinguished to prevent it from scorching the village roads and other community-owned agricultural areas. “Pineapples were chosen as a firebreak because based on the residents’ experiences, pineapple does not easily burn. This is due to the close distance between the plants and the plant’s thick leaves which makes them more resistant to fires,” said Agapitus, a community facilitator from the Forum for the Environment (Walhi) - West Kalimantan.

Pineapples were also used as a firebreak in Jaya Raya Hamlet, which is adjacent to Jaya Hamlet. Approximately 4,000 pineapple seeds were delivered for the two hamlets through Pontianak.

"The distance between each tree is approximately 1 x 1 meter. Because it functions as a firebreak, the pineapples are planted in elongated columns,” said Agapitus.

Syafii's business has been growing since 2018. He used the pineapple seeds donated by Walhi, West Kalimantan, and planted them on other peatlands. This plot is located approximately 1 kilometer from the firebreak in his hamlet.

The cultivation area in the development plot is approximately 250 x 35 meters. Syafii also grows cassava, chili, galangal, and several other commodities around the pineapple plantation. The plot of land has frequently burned in the previous years. Syafii once had to stay up all night to keep watch and extinguish the fire around his work hut. Cassava intercropped with pineapple in the peatland ©Aries Munandar

“I used a tank (pesticide sprayer) to put out the fire. The fires lasted for days and were only truly extinguished after the heavy rains," he said.

The residents of Sungai Enau Village and the surrounding area have long been familiar with pineapple cultivation. Abdul Halim, Head of Jaya Hamlet, has also planted pineapples at the land where the fire occurred 10 years ago.

“The market opportunity for these commodities is actually quite promising. The demand usually spikes before Eid Mubarak because people need pineapple to make jam,” said Abdul Halim.

Sungai Enau farmers usually sell fresh pineapples to Pontianak, the capital city of West Kalimantan. It takes approximately 1.5-2 hours by motorbike to get there. The actual travel time could be shorter if the road conditions were not so heavily damaged. Halim wants to expand the pineapples cultivation activities so it could become the mainstay commodity from their hamlet rather than just using it as firebreaks. However, he did not receive a positive response.

"The other residents said that it would be difficult to clear the land for other activities or to build a house on it because pineapples have been planted there," said Halim, conveying the residents' excuses.

However, planting crops that could thrive in dry peatlands, such as pineapple, cassava, galangal, does not support peatland sustainability. Peatlands should be kept wet as much as possible, hence if it has already been drained, the best practice is to re-wet the peatlands by building blocks in the existing canals. If you want to cultivate the land, try prioritizing plant species that do not require peatland drainage. Rewetting peatlands is the best way to avoid land fires. 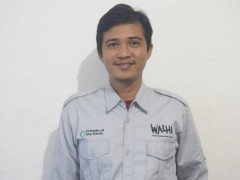 After BRGM's Life is Extended