The Liberica coffee (Kopi Laut) that the Banyuasin people once neglected is now regaining popularity. The government and the people of Banyuasin once again consider this coffee as a commodity that can improve the welfare of the surrounding community of the peatlands in South Sumatra.

It has a slightly sour taste, but the fragrance of nuts, vegetables, and honey sets this coffee apart from other types of coffee. Kopi Laut has long been known to the people Air Gading Village, Muara Padang Banyuasin, South Sumatra. Although it is called Kopi Laut, this coffee is actually grown in the peat swamp areas or better known to the public as the rawang. The indigenous people called it Kopi Laut because it is cultivated in lowland peatlands.

The deeper the peat in the cultivation area, the more pronounced the coffee aroma will be. As a result, Sutarman, a coffee farmer in Air Gading village, has decided to continue cultivating Kopi Laut as a source of livelihood.

"Coffee has been grown in the peat area since 1982. At that time, the government allocated coffee as a secondary crop for corn, which was the main commodity cultivated in the transmigration plantation area," he said. Coffee production has increased rapidly since the cultivation started in 1982. One area can produce a maximum of 5 tons/ha/year to meet the public demand at that time.

“Unfortunately, after five years of cultivation, the price of this coffee started to decline. The price became very low and the community was forced to admit that the income from coffee cultivation can no longer meet their cost of living. Gradually, the farmers stopped planting coffee,” he said.

The farmers converted their land to plant more lucrative crops, namely oil palm, and on a smaller scale, rubber. In the end, the number of peat coffee farmers became fewer.

Nowadays, the number of Kopi Laut farmers can be counted with one hand and the combined plantation area is only 15-20 ha.

"In the past, 60-70% of the residents were coffee farmers who independently met their own daily coffee needs," he continued.

Kopi Laut cultivation has revived after the mentoring process carried out by the Peat Restoration Agency (BRG) working group in South Sumatra.

Sutarman admitted that he and several other farmers who are still enthusiastic about coffee farming have received quite a lot of assistance, especially in the harvesting, packaging, and trading of the Liberica coffee.

“In the last two years, this coffee has become more widely known. Previously, we only wrapped the coffee in plastic bags and packaged it in very simple packaging, but it's more modern nowadays. In fact, we could say that this is good quality coffee,” he said.

Sutarman and a number of other coffee farmers are currently trying to improve the way this coffee is cultivated. They started to do selective harvesting, namely by only harvesting the red/mature beans to get better quality coffee and abandoning the wholesale harvesting method they had been doing.

As for coffee production, he mentioned that the coffee plants on the peatlands (Liberica) are more sustainable. Even outside of its harvest period, this coffee plant is able to produce supplementary fruit which helps to increase the farmers' income. Liberica coffee from Banyuasin is sold at Rp15,000/kg, but the price could be higher for premium quality coffee.

“When compared to Jambi, which also produced the same coffee variant, the quality of Banyuasin coffee is lower. Therefore, we need the government’s support to increase the quality of our Kopi Laut and make it more competitive in order to increase its selling price," he said.

Sutarman admits that several farmers in his village wanted to cultivate peat coffee again, due to the sustainability of its production. “Many farmers have abandoned peatland coffee cultivation because of its low price, but this could change if it is managed with continuous assistance from the government. Hopefully, Kopi Laut will be popular again. Because this is the only area (plantation) in Banyuasin where Liberica peat coffee is cultivated,” he concluded.

In addition to being a characteristic of rural communities that have been cultivating Liberica coffee for a long time, if managed properly, the coffee cultivation business will also improve the village community’s economy.

Narto, the Head of Air Gading Village also expressed support for coffee cultivation. He and the district government are working to convert the village into an ecotourism village, whether due to its specialty coffee or the elephants and other types of animals.

"Kopi Laut has long been famous and we also want to reintroduce the coffee as a village icon," he said.

Askolani, the Banyuasin District Head, said that Kopi Laut will be promoted more often, especially during business trips, and will also become one of Banyuasin’s original culinary icons.

"We will re-introduce this coffee as a part of the South Sumatra peatland," he said via short message.

The village will also strive to become an ecotourism village that is known for its coffee production as well as a conservation for native peat animals.

However, coffee cultivation land management must consider sustainable peat management principles. This is because coffee is not native to peatland, although it is peat-friendly and can be cultivated on peatlands. 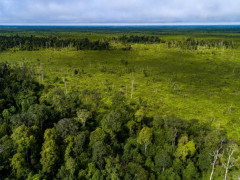