Decades ago, the Proboscis Monkey (Nasalis larvatus) lived peacefully in Buas-Buas Village, Tapin District, Candi Laras Utara Sub-District, South Kalimantan. However, according to the residents, the endemic sharp-nosed animals that often live in peat forests are slowly becoming marginalized. The increasing number of land fires and oil palm plantations have triggered a decline in the population of Proboscis Monkeys.

In mid-October 2020, Pantau Gambut had the opportunity to visit Buas-Buas Village, which is located on the outskirts of Tapin District, South Kalimantan. Traveling on a motorbike from Banjarmasin, the capital city of South Kalimantan, the Pantau Gambut team had to travel 185 kilometers to get to the village.

Access to this village is arguably quite challenging. The journey took two hours from Tapin District to finally reach Buas-Buas Village. During the trip, we had to pass through a corrugated cement-cast road with potholes and occasionally had to pass a rotting wooden bridge.

Contrary to its name, the Buas-Buas villagers are friendly. We met Rafi'i, the Buas-Buas Village Chief when we arrived at the village. He has lived in the village for almost 40 years since he was a child. According to him, the ecological changes affecting his village have been occurring for a long time.

"I've been living here since I was a child, since 1981. There have been many changes, sir. In the past, hundreds of Proboscis Monkeys were hanging in trees. trees and plants, such as belangiran and purun are also easy to find. But now, (Proboscis Monkeys) are rarely seen", recalled Rafi'i while talking to Pantau Gambut.

According to the Village Chief, who has only been in office for 6 months, the declining Proboscis Monkey population is a result of the decreased number of Galam trees (Melaleuca cajuputi) in the peat forests. Furthermore, according to him, this massive loss of wildlife occurred in the 1997-1998 forest and land fires.

"All the peat forests here were wiped out during that period. The Proboscis Monkeys then became scattered, ran, and some of them died,” he said.

The Proboscis Monkey colonies began to be seen again in the 2000s, after the Galam trees gradually grew back on the shallow peatlands. However, the Proboscis Monkey population in Buas-Buas continued to decline due to the land fires in the following years, such as the massive forest fires in 2015, due to a prolonged dry season caused by El Nino. The establishment of oil palm plantations, which started in 2015, has also led to a decrease in the Proboscis Monkey habitat. Based on the data, the Buas-Buas Village forest area comprises:  7,976.56 hectares of Non-Forest Areas (APL) and ​​93.75 hectares of Production Forests.

There are two companies operating in Buas-Buas Village, namely Platindo Agro Subur (PAS) and PT Tri Buana Mas (TB). PT TB is a subsidiary of PT Astra Agro Lestari (AAL). PT PAS and PT TB, both palm oil companies, have a total concession area of approximately 24,000 hectares, out of which approximately 1,200 hectares are peatland. The establishment of these two companies resulted in the reduction of forest areas in the Buas-Buas Village. This also reduced the availability of food and shelter for the Proboscis Monkeys.

"There are approximately 400 hectares of peat forest remaining. It's almost gone. Only the residents wanted to maintain the remaining land for their agricultural activities," he said. An example that he provided is the villagers’ cultivation activities, such as watermelons and chilis as a form of productive peatland management.

Rafi'i looked confused when asked about the future of the Proboscis Monkeys remaining in Buas-Buas Village because some of the monkeys have moved to other areas. "We let them be. We, the villager, still want to maintain the remaining peatlands so other animals and plants can grow. It doesn't always have to be oil palm," he said.

Artoni, an elderly resident of Buas-Buas Village also said the same thing. Even though he does not own any land, he hopes that the residents will not sell their land for other purposes. This is also for the sake of preserving nature in Buas-Buas Village, which partly consisted of peatland. "Now we just focus on cultivating other commodities," he said.

Based on this lesson, the community, supported by partners and local government, should be more concerned about protecting the environment and existing peatlands. This can be done by preventing forest destruction, increasing land monitoring, preventing peat fires, and restoring damaged peatlands. Peatland protection and restoration activities will not only bring positive impacts on land conditions but will also have a positive impact on the flora and fauna in peatlands, as well as the communities living in peatland areas. Between Prayers, Indigenous Land, and Land Swaps in Papua Food Estate: Reopening the Peatland due to the Pandemic 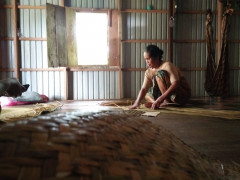