At 1 pm in the afternoon, Maimunah was weaving purun, a type of swamp grass, in the living room of her house in Hapalah Village, Banua Lawas, Tabalong, South Kalimantan, on Wednesday, 22 September 2021. In the 3x3 meter room, she weaved each piece of purun to make a mat.

When Pantau Gambut visited her house, she had finished weaving two mats since morning. Maimunah said that in a day she can make five mats at most. The size of the mat is 80x120 centimeters.

Maimunah is skilled at weaving purun since she was a child. Now she is 53 years old. She uses the skill learned from her parents to meet her daily needs. She gets the purun from farmers in her village. The highest income she got from selling mats in a week was IDR 150,000. Her average production capacity is 30 mats per week.

Maimunah admitted that the income from selling mats is very low. "I try to find other sources of income," she said. Usually, she works as a laborer tending to other people's land to make up for the lack of income.

In Tabalong, Hapalah Village is famous for producing purun handicrafts. 77.38 percent of the total area of ​​3,417 hectares in Hapalah Village are peatlands. The rest is alluvial soil formed by silt. The process of weaving a purun mat ©Donny Muslim

Strong plants with many benefits

Purun is one of the plants that thrive in peat swamps. This weed grows around the waters. Purun that is used for weaving needs to be one meter long. There are various types of purun in Indonesia, including lake purun, rat purun, and bajang purun. In South Kalimantan, purun can be found in several districts, i.e. Barito Kuala, Hulu Sungai Selatan, Tapin, Hulu Sungai Utara, Balangan, Tabalong.

The Environment and Forestry Research and Development Center (BP2LHK) in Banjarbaru noted that the peat swamp weed in Hapalah Village is classified as lake purun or Lepironia articulata. "Lake purun has sympodial rhizomes which spread below the soil surface," said Marinus Kristiadi Harun, a researcher at BP2LHK.

Lake purun grows on shallow peat, on the banks of rivers, canals, and lakes. Marinus explained that people usually use lake purun to make woven crafts, although other types can also be used. Purun's strength is the reason people use it to make crafts, such as baskets, mats, hats, and straws. "My friend in Mantangai (Central Kalimantan) has a 100-year-old purun basket made by his grandmother," he said.

Purun can last long because it contains silica, which is a mineral composed of silicon dioxide. Purun grows in the mud so it won't easily die in a flood or fire. "If the top part is burned, the bottom part is still safe," he said.

But purun can't survive on dry land. Its fertility depends on water. "Purun can function as a bio filter for water from the oil palm plantations," he said. But, he emphasized that it requires a good hydrological system.

Pantau Gambut also visited the peatland accompanied by Mistani, 63 years old, a community leader in Hapalah Village who is also a purun farmer. The 30-minute travel by boat was quite tiring. Mistani periodically turned off the boat's engine so that the propellers won’t get damaged when they are stuck in the mud. He was very careful when cruising along the edge of peat forest that the locals call the Awang Gampa River. It was low tide at that time so occasionally the boat almost overturned when hitting wood.

"We can get there fast during the high tide," said Mistani.

He cultivates purun in a one-hectare field. When we got there, Mistani told us about his income from this endemic plant. "I only get 30 bunches of purun a day," he said. One bunch of purun contains 50 stalks at most. The selling price is IDR 2,500 per bunch. A resident of Hapalah Village, Mistani, passing the purun fields on a motorized canoe ©Donny Muslim

Mistani said that the amount of purun that he can collect nowadays is very small compared to in the 1990s. "In the past, I could get 60 bundles," he said.

Although purun is still abundant, he considers the craft sector to be underdeveloped. "We only produce mats," he said.

However, this does not mean that local residents are reluctant to learn to make other handicraft products. In 2020, the Peat and Mangrove Restoration Agency, through a team based in the region, had a plan to train the local residents to make various purun crafts. "But until now there has been no follow up," he said.

Residents are enthusiastic about the training because it will affect their economy. "Purun can be made into baskets, straws, or other products with a higher price," he said.

The residents of Hapalah Village have not realized their aspiration to develop various crafts. However, they are worried about the damaging threat to the peat ecosystem where the purun grows. "People have rejected the oil palm plantations since 2008, when they were still disseminating information about the company," he said

In 2016, an oil palm plantation company obtained the Land Cultivation Permit (HGU). The company's concession area surrounds the Benua Lawas Subdistrict. Until now the company has not carried out any work activities at the concession area.

Pantau Gambut observed that the Banua Lawas area has 8,885 hectares of peatland. The concession area is 9,501 hectares and the peat area within the HGU concession is 7,654 hectares. It covers 86.15 percent of the total peat area in the subdistrict.

Mistani and the residents can only hope for the government's assistance to maintain their livelihoods. "There are a lot of potential peat plants here that must be protected," he said.

Head of the South Kalimantan Environment Office, Hanifah Dwi Nirwana, said that the oil palm plantations and their processing plants in Kelua and Banua Lawas Subdistricts are no longer operating. "This area has peatland, so we really hope that there will be no activity on the plantation," she said.

Hanifah explained that the peat’s ecological function is very strategic and important for the lives of local residents. Moreover, peat can absorb water in large volumes. "Of course this is also very important considering that South Kalimantan is under flood threat," he said. 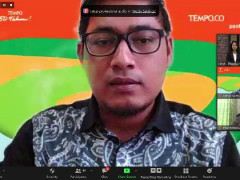 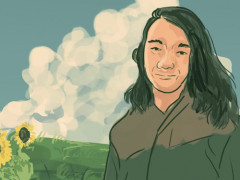