Sago is highly potential to be developed as a national food commodity. Good sago management should involve various parties, including the government, the private sector, and local communities, to improve the community's economy through sago production.

Indonesia is an agricultural country that is rich in natural resources, including biological sources that produce high carbohydrates. Considering its natural and biological potential, Indonesia should become an exporter of carbohydrate raw materials. Unfortunately, Indonesia has not been able to optimize these resources, so it still relies on imports.

Based on the National Statistics Agency (BPS) data in 2015 published in Sindo newspaper, tapioca starch exports reached 91% compared to other sources of starch, such as corns and potatoes. Moreover, the Ministry of Agriculture also stated that the development of food diversity in terms of consumption has increased, as reflected in the increase in Indonesia's Desirable Dietary Pattern (PPH) score from 86.0 in 2016 to 90.4 in 2017.

In line with Government Regulation No. 17 of 2015 Article 1 Paragraph 15 concerning Food Security and Nutrition, rice is included as a staple food because it is consumed by the majority of Indonesian people. However, Indonesia faces obstacles due to declining rice production so that at the end of January 2018, the government was forced to import 500 thousand tons of rice from Thailand and Vietnam. This measure was taken to overcome the spike in rice prices and strengthen the national rice reserves. Some parties consider that rice imports are not necessary if Indonesia can diversify its food.

Food diversification is an effort to achieve food sovereignty, which can be realized if the community can produce food independently, sell their local produce, and then meet their economic needs from the sales.

One of the foods that can be used as an alternative source of carbohydrates is sago. Research conducted by the University of Papua shows that sago palms can produce 300 to 500 kg of dry starch per tree. Moreover, sago palms also provide ecological advantages because they can absorb high amounts of carbon dioxide for the photosynthesis process. So, they can reduce the greenhouse gas effect that causes global warming.

Sago is highly potential to be developed as a national food commodity. Sago plants grow in several areas in Indonesia, such as Southeast Sulawesi, North Sulawesi, North Ambon, and Papua. However, some studies have found that most sago varieties are found in Papua. Therefore, it is not surprising that Papua is the center of sago plant’s diversity.

Besides having many varieties, sago plants also have agronomic potential because they can grow in swamps or peatlands. Sago plants are also tolerant to soils with low acidity or pH, they can be harvested at any time when they have reached the age of 8-10 years, and can be harvested continuously without having to rejuvenate them. Intensive maintenance is also not needed, so cultivating sago is easier and cheaper but still produces quality food that can meet people’s need for carbohydrates.

Therefore, the government and local communities should optimally implement the sago cultivation program in Papua. The Minister of Agriculture of the Republic of Indonesia has issued Regulation No.134/Permentan/OT.140/12/2013 1/11 concerning Guidelines for Good Sago Cultivation. It states that sago production can reach 20-40 tons of dry starch/ha per year if cultivated properly. Apart from being a potential source of staple food, sago can also be used as raw material for agro-industry, such as food flavoring, lactic acid, liquid sugar, as well as raw material for renewable energy.

As explained above, food diversification through sago cultivation is one of the programs to achieve food sovereignty. Unfortunately, the increasing consumption of processed sago and improper cultivation has led to massive exploitation of the plant. Sago palms become rare because they are only used for commercial purposes.

Good sago management must involve various parties from the government, the private sector, and local communities so that the management procedures to the processing can be carried out in accordance with sustainable agricultural practices. This practice is intended to maintain the ecological value of the environment but can also improve the community's economy through sago production.

Unfortunately, intensive sago cultivation can only be done by the government and private companies. The community still uses traditional and mechanical technology (grating machines) which can only produce limited quantities with medium quality. Moreover, farmers also do not have adequate capital to develop their businesses. Therefore, the community needs to increase innovation to use the land in an intensive and integrated manner in order to develop this local commodity.

With the government’s support and by involving the community in sago cultivation, we can reduce the import of carbohydrate sources, and self-sufficiency in the food sector can reduce the deficit in the State Budget (APBN). Meanwhile, with the inclusion of sago into the Ministry of Agriculture program through Presidential Instruction No. 9 of 2017, Indonesia has the opportunity to improve the existing food crisis and it will have a positive impact on the people’s economic, social, cultural, and environmental conditions.

Let us overcome the food crisis in Indonesia by cultivating sago on our land! Complaints about Living Amid Smoke in Teluk Makmur South Kalimantan and the Unclear Fate of the Palm Oil Moratorium 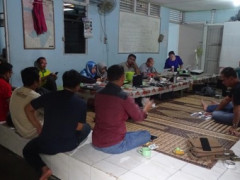