Based on WHO publication dated 29 December 2020, the COVID-19 pandemic has infected more than 79 million people worldwide, with a total death toll of 1,761,381 people. Meanwhile, the number of cases in Indonesia, based on the information published by the government as of 29 December, 727,000 people have tested positive for COVID-19 with a death toll of 21,701 people.

The impact of the pandemic was also felt by the Riau residents, with a total of 24,715 COVID-19 cases and 576 official deaths. Riau itself has on several occasions been recorded to have the highest number of positive cases per province outside of Java Island.

The COVID-19 outbreak has created havoc in many countries and exposed how fragile and unprepared the country's healthcare system is in handling this new experience. But this experience has created good lessons learned for the government. Having experience in managing one type of disaster does not necessarily make the state administrators manage this new disaster more seriously.

The material losses suffered by Riau, a province that has experienced multiple forest and land fires for more than two decades, has reached hundreds of trillions rupiah and even the loss of life due to haze exposure has not made Indonesia, including the Riau Provincial Government, more determined in fixing the root problem.

The year 2020 is considered to be the toughest year for the people of Riau. The Governor of Riau declared two states of emergency. Emergency related to forest and land fires and the COVID-19 pandemic. These two disasters tested the lung resilience of the Riau people.

What is the cause of this year’s reduction in hotspots? Has the pandemic reduced community activities on peatlands and forests? Or is it because the government's peat restoration program has successfully suppressed the number of hotspots? The answer to this question requires comprehensive field research.

According to an article published in The Conversation in mid-December, written by three authors from the National University of Singapore, the Peatland Restoration Agency was mandated by the government to restore 2.6 million hectares of dry and damaged peat in 7 provinces in 2020, but they only managed to reach approximately 45 percent of the target.

But what we are discussing here is the Riau population's ability to deal with this deadly virus which targets respiratory function. Exposure to toxic pollutants produced by the annual fire smoke is known to negatively affect immunity.

Research by Harvard University and Columbia University (2019) revealed that premature deaths due to forest and peat fire smoke could reach up to 36,000 deaths per year between 2020 - 2030. Approximately 92 percent of these deaths occurred in Indonesia, 7 percent in Malaysia, and 1 percent in Singapore.

The report highlights the PM2.5 pollutant inhaled by the residents in forest fire-affected areas. This pollutant will be concentrated in the lungs and increases the risk of premature death. The nanoparticles cause acute respiratory infections.

The number of Upper Respiratory Tract Infection patients in Riau increased during forest fires, such as the one in September 2019, compared to before the forest fires.

A research paper titled "Exposure to air pollution and Covid-19 mortality in the United States" published by the Harvard Biostatistics Department states that COVID-19 patients living in an area with polluted air are much more likely to die. This study states that, on average, long exposure to PM2.5 will increase the chance of dying from the Coronavirus by 15% when compared to those living in areas with cleaner air. Of course, this research still creates debate. However, it is generally acknowledged that there is a relationship between air pollution and viral infections that negatively affects immunity.

How will the Riau Provincial Government respond to the dangers caused by these two calamities? The answer is reflected from the government’s effort in responding to these two ''death'' threats. Unfortunately, we haven't learned from our own experience and the government policy is still limited to ''putting off the fires'' type of emergency policies. However, they still fail to address the root cause of the problem that resulted in the population’s vulnerability when dealing with future pandemic disasters.

In-depth research conducted overseas such as this one should serve as lessons learned and criticism for the universities in Riau. The role of the universities/campus should be more beneficial to the people outside of its ivory tower and provide a policy foundation to deal with the root of the problem. Similar to the general public, the campus community is also a victim of the haze which is now exacerbated by the pandemic.

**THIS ARTICLE WAS PREVIOUSLY PUBLISHED ON THE GORIAU.COM ONLINE MEDIA PORTAL ON 31 DECEMBER 2020** Jambi Farmers Named as Forest and Land Fires Suspects, What About the Companies? 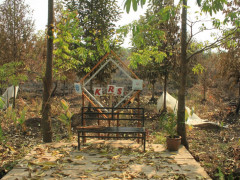