Former loggers in Jambi's peatlands have now come to their senses and have switched professions to become beekeepers. Nowadays, they just have to reap promising yields and no longer need to run away from the officers while earning a living.

The dry season in Rantau Karya Village, Geragai Sub-District, East Tanjung Jabung District, Jambi Province led to long daylight. In the middle of a run-down oil palm plantation with thick acacia, a dozen men were busy harvesting honey. I know one of them, Iwanto. For the past two years, Iwan, as he is often called, no longer has to explore the dark wilderness of Berbak Sembilang National Park (TNBS), while carrying a chainsaw to loot high economic value timber from the conservation area. Nowadays, his dark and muscular hands are used to raise hundreds of thousands of honey bees.

"In the past, when I logged timber, I was often chased by officers, if caught the wood was taken away, cut and we don’t get anything," Iwan recalled.

Iwan and 39 residents who are members of the Talago Jaya Community Group (Pokmas) received capital from the Peat Restoration Agency (BRG) in 2019. The Self-Management Cooperation Agreement, one of the revitalization programs in peat areas. At that time, BRG provided the capital of Rp 100 million which was disbursed in two stages.

“At that time, the choice was to breed honey bees or swallow. However, swallows require a lot of capital, so we choose to become beekeepers,” said Iwan.

Iwan said that the decision was taken due to limited capital because they wouldn't need to build a building for nests required by the swallow business, which would need a lot of money.

Iwanto, a former logger who has now chosen to become a beekeeper ©Yitno Suprapto

After the first assistance was disbursed, the residents tried to purchase 20 boxes of Apis mellifer bees, which are already well-known in the community. The bees were initially placed in Danau Lamo Village, Maro Sebo Sub-District, Muaro Jambi District. However, because they were too far from the beekeeper's homes, the bees were eventually moved to the Berbak Sub-District, East Tanjung Jabung District. "After being moved, they all died due to lack of food," he said.

Iwan and his friends initially thought that the oil palm plantations of the residents in Berbak could be relied on to feed bees, but they were wrong. Lack of food and their lack of knowledge about beekeeping caused a lot of the bees to die.

This failure discouraged many group members from trying to raise bees and even gave up. They became doubtful that the honeybee business would succeed, but Ivan did not want to give up.

"When the second aid was disbursed, we bought another 20 boxes of bees, we put them in Rantau Karya Village. Praise God, they are still surviving to this day."

Rantau Karya Village, Geragai Sub-District, East Tanjung Jabung District was not selected without reason. The village is located right next to the land belonging to PT Wira Karya Sakti (WKS) which held an acacia plantation concession permit covering an area of ​​290,378 hectares. Iwan and his friends then rented land owned by the village government which was directly adjacent to the acacia forest where the honey bee farm was located.

"Because there are a lot of acacia flowers, we don't need to feed them anymore, we can just let them free in the morning and they will come back later in the afternoon," said Iwan.

Abundant food intake makes the bees reproduce quite rapidly. After almost two years of beekeeping, the bee population raised by Iwan and his friends increased to 25 boxes.

Iwan's success in raising honey bees has attracted other residents to join him. In addition to raising bees for Pokmas Telago Jaya, Iwan also manages honey bees for 20 residents who have entrusted their honey bees to him. Iwan now manages at least 600 honey bee boxes in Rantau Karya Village.

By raising the honey bees belonging to the residents, Iwan gets a third of the honey produced during harvest. Thanks to his perseverance, the father of three now have 18 boxes of his own honey bees apart from the Pokmas’ honey bees. “Now, Praise God, I make enough for the family. I do not have to run away when being chased by officers," said Iwan with a chuckle.

Jambi is relatively hot this February. It occasionally rains in some locations. This is beneficial for honey beekeepers like Iwan. When the weather is sunny, the bees can freely fly through the acacia forest to search for blooming flowers.

"In fact, rain creates extra work for us, we will have to feed them. The (bees) can't look for food, they have to stay in the box," said Iwan. He is optimistic that honey bee farming can help improve the economy of people living in peat areas. The main reason is that the initial capital required is relatively low, only approximately IDR 2.5 million per box. Meanwhile, each box can produce 2-3 kg of honey in each harvest.

The honey harvested will be sent to the shelter, but some owners choose to sell it for retail to gain a bigger profit. One kilogram of honey is sold for Rp 100,000 to retail.

Last February, Iwan was able to harvest approximately 1.5 tons of honey at a time from the 600 bee boxes that he manages. Usually, he can harvest twice a month. "But if the weather is sunny, you can harvest three times a month," said Iwan.

Roni is another resident who has achieved success by raising honey bees. After almost two years in the business, he already had hundreds of boxes. He also manages honey bee farms in nine locations in the East Tanjung Jabung area.

The 54-year-old man admitted that he was able to buy three cars from honey bee farming. "Praise God, I could also purchase a plantation from harvesting honey."

He also sells honey in plastic bottles and sold it on the side of the Sabak-Jambi highway, in Rantau Karya Village. On average, he can sell 10 kg of honey each day.

Andri was one of the people who entrusted the management of 60 boxes of honey bees to Iwan. Andri started his honey bee business because it is more profitable than opening an oil palm plantation.

From his calculations, oil palm plantation requires more work with a smaller profit than raising honey bees. "If we hire people (to manage oil palm plantations) we can't profit, because the cost is too high, this is not an issue with honey bee farming," he said.

“The most important thing to be careful of with honey bee farming are ants and bee lice, nothing else. There's a lot of acacia here, so you don't need to feed the bees," Andri continued.

"In fact, we have to avoid fires when raising honey bees, because we need nature," said Andri. 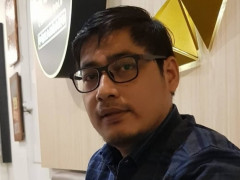