The East Tanjung Jabung District has a peat landscape of 181,000 hectares serving as the habitat for many biodiversities. This biodiversity richness inspired the batik craftsmen in creating their batik patterns. However, peat is increasingly threatened by deforestation, drainage for establishing new oil palm plantations, industrial plantation forests, and community agriculture.

Despite being 65 years old, Yasriwati is still busy making batik. She showed me a piece of batik fabric with dark blue background and a palm tree pattern printed in pink, which looked beautiful and elegant.

The trees that grow freely along the Pengabuan river and peat swamp is the main characteristic of the batik produced in East Tanjung Jabung District, Jambi Province. "This palm tree pattern is very popular among tourists visiting (East Tanjung Jabung)," said Ibu Yas, her nickname.

She has made hundreds of batik fabrics with more than 20 patterns since 2015. Bu Yas' batik mostly illustrates the biodiversity found in the swamps and the east coast of Sumatra, such as mangroves, palm, jeruju, pedada fruit, areca nut, deep coconut, shellfish, and the migratory birds.

Jambi batik patterns are developed from the traditional Jambi patterns that are rich with Indian cultural influences. Red is the dominant color and the lattice pattern with the image of an eight-petal flower inside, it is similar to the patola pattern, a type of fabric brought by Gujarat traders. Another characteristic of traditional Jambi batik is flora and fauna patterns.

For example, many batik patterns in Tebo and Muara Bungo District illustrate a variety of endemic animals such as pheasants and peacocks. On the other hand, flora patterns, such as fern leaves and bamboo shoots, are more dominant in the riverside areas, such as Sarolangun District. However, since the penetration of Islamic teachings in Jambi, fauna patterns have started to be abandoned, and Jambi batik tends to illustrate leaves and flowers.

In the 20th century, along with the Dutch East Indies claim of Indonesia, the popularity of batik craft in Jambi also declined. The Jambi batik only started to revive around the 1980s. Several traditional batik patterns have been preserved, such as the tapuk mangosteen flower, sliced durian, bullet wood flower, durian flower, areca leaf, kepak lepas, merak ngerem, and pheasants.

The popularity of Indonesian batik also influenced the development of batik in East Tanjung Jabung. Batik patterns are rapidly developing. In the last five years, the Industry and Trade Office has documented more than 50 batik patterns, and more than half of them illustrated biodiversity.

A number of tourist attractions and annual events held on the east coast of Sumatra have inspired batik craftsmen to make these events into batik patterns, such as safar bathing, menyumbun, Cemara Beach, and also the migratory birds.

In addition to being a tourist attraction, more than 181,000 hectares of peatland in East Tanjung Jabung have also inspired craftsmen. The batik craftsmen in East Tanjung Jabung have tried to create different batik patterns than the typical Jambi batik. They are inspired by the culture and the environment around them, including the peatland biodiversity. Various patterns inspired by the peat ecosystems include nipah tree (Nypa fruticans), jeruju (Acanthus ilicifolius L), pedada fruit (Sonneratia caseolaris), and other types of wetland flora.

Buhori, the owner of Saye Batik, admitted that the Planchonia valida, which was previously abundant in swamps and riverbanks, is now increasingly difficult to find.  "I am making Planchonia valida batik patterns because they are rare nowadays," he said.

The District Head of East Tanjung Jabung, Romi Haryanto, said that large-scale land clearing has had a serious impact on biodiversity. Without realizing it, many flora species are now disappearing and are slowly becoming extinct. "There must have been impacts, without us realizing it," he said.

"We want the children to know that the flora and fauna in the batik patterns used to be available in East Tanjung Jabung," he said.

East Tanjung Jabung batik fabric generally consists of three to four colors, usually a combination of yellow, blue, green, red, and black. Some batik craftsmen use natural dyes to create a distinctive color. For example, mahogany leaves are used as black dye, jengkol or jering bark are widely used for purplish blue and blackish brown dye, depending on the binding agent used. The color brown can also be obtained from coconut fiber and pedada tree bark.

"If the pedada tree bark is old, the color will be reddish-brown," said Buhori.

He used the roots of the noni tree for red coloring, but it is getting harder to find nowadays. "The noni tree will wither if we cut the roots, so we try to find other alternatives," said the former honorary staff.

However, this is a time-consuming process. The material for the natural dye must be boiled for several hours until it thickens. Afterward, the fabric that will be used for the batik will be soaked overnight and then dried in the shade, this process will be repeated 5 to 7 times.  The natural dye produces colors that look faded and does not as look as sharp as synthetic dyes.

With regards to productivity, Ibu Yas can make up to 30-40 pieces of batik fabric each month. The incoming orders usually increase before the holidays or semester break.  However, the Covid-19 pandemic has disrupted the batik business in East Tanjung Jabung.

"Events were frequently held in the past, with a lot of people looking to buy batik, but now there are no events and large crowds are prohibited, which has also affected us," said Yasdi, a batik craftsman in East Tanjung Jabung.

Moreover, the East Tanjung Jabung batik pattern is not widely known to the public. This is also an obstacle that makes it increasingly difficult for the craftsmen to market their products. The community is more familiar with the Jambi batik patterns, which tend to refer to batik craftsmen in Seberang Village, Jambi City.

“We want to make our batik more popular. The people who work here (Sabak), come from many places, so when they wear our batik whilst going out, people will see how good the East Tanjab batik is and it will be sought after, "said Romi. 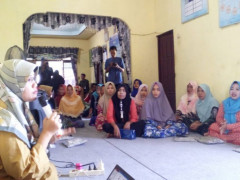 Smoke Hazards from Peatland Fires Ahead of the Asian Games