The South Sumatra East Coast is known to be rich in peat. The construction of a bridge connecting the two islands will damage the peat.

The government is planning to build a bridge connecting Sumatra and the Bangka Belitung Islands. The construction site of the proposed bridge, i.e. the Bahtera Sriwijaya Bridge, has already been agreed upon.

The South Sumatra Provincial Government and the Bangka Islands Government have recently agreed on the construction site.

Located on the eastern coast of Sumatra Island, this bridge will closely connect the Trans Sumatra toll network interconnection. Out of the three construction sites considered, the Tanjung Tapa Village, Ogan Komering Ilir District was selected for the bridge construction.

The Tanjung Tapa Village is considered to be closer to the road connected to the Kayuagung, OKI toll gate. The bridge is projected to be able to reduce travel time, via the toll road, to Java. The construction of the 15 km bridge is estimated to have cost Rp 15 trillion.

In the future, the bridge will be a paid bridge or toll bridge, similar to the Suramadu Bridge in Java.

The Tanjung Tapa Village topography is relatively deeply covered in peat. Therefore, the bridge construction will certainly threaten peat sustainability in South Sumatra. The government has not made the correct decision in choosing a coastal area that is rich in peat.

The Ogan Komering Ilir District in South Sumatra is known to be a district that is rich in peat. Its peat area is among the largest. The district government recorded that the peat area in their district reached 6,830 hectares.

Tanjung Tapa Village is located in Tulung Selapan District. This inter-island bridge will certainly cause damage to the peat in the area.

The bridge construction will further disrupt the peat area in Ogan Komering Ilir, South Sumatra. The government clearly does not prioritize the environmental insights, such as the peat area, which supports the coastal ecosystem in the East Coast of Sumatra.

The bridge construction will promote the development of residential areas, warehouses, and other business areas, such as docks.

Damages to the East Coast of Sumatra are a serious threat, considering that this is the mangrove area for  Sumatra island. The government is very clear in using the economy or accelerating development as the pretext, but they are neglecting the environmental aspects in doing so.

The destruction of peatlands also encourages the potential for more forest and land fires. Changes in peat topography will convert South Sumatra's peatland into mineral land.

Peat damage is damaging to the South Sumatra ecosystem. The major function offered by the peat to the environment will be lost and will cause other damage, e.g. the loss of habitat for the fauna and flora.

Not to mention, the potential damage to the environment that could occur when the peat has been eroded. Therefore, the Government should conduct an environmental impact analysis for the bridge construction.

The construction of this bridge could be viewed as a threat that could submerge the East Coast or the Island of Sumatra.

Can the Government prioritize the role of peat in the construction of this bridge? It seems impossible.

*This opinion was conveyed by the Executive Director of Walhi South Sumatra well as the Coordinator of Pantau Gambut South Sumatra, Hairul Sobri.

** THIS ARTICLE WAS PREVIOUSLY PUBLISHED ON WongKito.co, ON 17 DECEMBER 2020 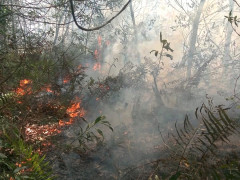