Bird's eye chili is a prominent commodity for residents of Hiyung Village, Tapin Tengah Subdistrict, Tapin District. Their failed experience in cultivating rice on local peatlands led them to switch to chili. Now, chili produced by Hiyung Village is recognized as the largest bird’s eye chili in Indonesia.

Sunday morning in Hiyung Village, Aminah rushed to her yard. On the terrace lay Hiyung chili seedlings that had sprouted and grown. She just finished harvesting two months ago and will start the chili planting process again early next year. This 45-year-old woman is one of the hundreds of farmers who diligently plant chilies on peatlands. She said she has been doing this work for 12 years.

"We depend on chili for a living. Thank God we can support our family," said Aminah when we met her in Hiyung Village on Sunday (8/3/2020).

At first, Aminah never thought that the peat soil in front of her house could be this productive for planting chili. In the past, she almost always failed to grow rice on her land. Considering that chili is a dryland species, when cultivating chili, we must pay attention to the principles of sustainable peatland management by not draining it because it might cause peat fires.

"Rice can’t grow well on the peatlands here and there are many pests. So, people chose to give up at that time. But around 1993, someone brought chili from the neighboring village, and apparently it can grow well here," he recalled.

The neighboring village that she mentioned is Linuh Village, Bungur Subdistrict, Tapin District. In 1993, a resident of Hiyung, Soebarjo, brought about 200 chili seedlings from Linuh and planted them in his village. Apparently, the seedlings can grow well on Hiyung's soil. The chilies become spicier when cultivated in this village. Since then, the residents have gradually switched jobs to become chili farmers.

"Even though they are ordinary bird’s eye chilies but some people say that they become less spicy when planted on lands outside Hiyung," said Aminah.

The community can collect 2 tons per harvest, 30 times in a year. The highest price of Hiyung chili was Rp 70,000 to 90,000 per kilogram. The market price can be much higher than that.

Just like Aminah, the Head of Hiyung Chili Association, Junaidi, also felt the blessing of planting Hiyung chilies in his village, even though he only owns one hectare of land. He keeps receiving orders of wet chilies from people in and outside Hiyung Village.

"I have at least 35 customers, consisting of collectors, retailers, and restaurants. I receive orders from South Kalimantan and also all the way from Java," he said.

Junaidi said that he receives a lot of orders because Hiyung chilies are 17 times spicier than ordinary bird’s eye chilies. He wasn’t making it up. Based on the research conducted by the laboratory of the Postharvest Research and Development Center of the Indonesian Ministry of Agriculture, this chili’s capsaicin level even reached 2333.05 ppm.

Besides its spiciness, this chili is also known for its durability. Junaidi revealed that Hiyung chili can last for up to 8-10 days. He has proven it when delivering these chilies to exhibitions in several regions of Indonesia.

"According to the research, you could say that it is the spiciest and most long-lasting chili in Indonesia. We haven’t exported it but we are proud to have this chili," said Junaidi.

To maximize the sales, Junaidi shared that farmers in Hiyung have started to develop the downstream sector of wet chilies by processing them into shredded chilies. One bottle of shredded chili is sold for Rp 15,000. According to Junaidi, they develop the downstream sector of Hiyung wet chili to anticipate the falling market price. In 2015, Hiyung residents were disappointed because the selling price of their chilies fell to Rp 7,000.

"We finally thought of an idea to start producing shredded chilies. Facilitated by Tapin local government, we finally got the assistance from the South Kalimantan Provincial Government," he said.

He and the farmers refused firmly when other companies approached Hiyung's land.

"Our lands are close to oil palm plantations but we have an unwritten agreement. They should not encroach on our land and they need to maintain the 2-kilometer boundary. If someone approaches us, we will reject it. We just want to plant chilies," he said.

There are 10 chili farmer groups in Hiyung Village with a total of 200 farmers. According to data from Hiyung Village government, 80 percent of the villagers work as chili farmers. Various efforts have been made to maintain the existence of Hiyung chilies. For example, by registering the intellectual rights of Hiyung chili variety and Hiyung shredded chili at the Indonesian Ministry of Law and Human Rights so that no one plagiarizes this type of chili.

"Now the farmers’ businesses have started to develop. Our only challenge is land fires. In 2019, there was a fire in our land. But this year we have prepared the fire brigade and formed a firefighting farmer group," he said. 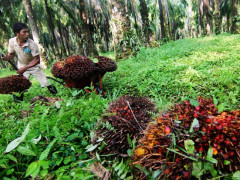